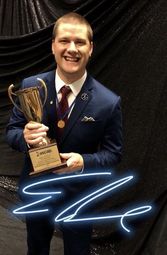 Tim Beutel (Tenor) started barbershopping in high school, when he formed a quartet inspired by the Gas House Gang. His quartet was together for several years, but they went their separate ways in college. Beginning at Bradley University as an engineering major, Tim soon found that his true passions lay in the music world, and he graduated with a degree in Music Education in 2009. He later finished a Masters degree in 2015. Tim now teaches choir and general music for the Morton, IL school district. Tim enjoys grilling out, sports, activities with his church, recording learning tracks, and mostly spending time with his family of four! 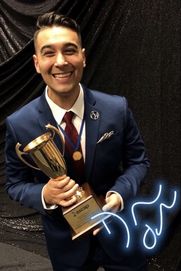 Drew Ochoa (Lead) was introduced to the barbershop style in his senior year of high school and immediately fell in love. His decision to attended Bowling Green State University was strongly influenced by the school's deep-seeded roots in barbershop singing. Here he formed a quartet and earned a gold medal with the 2011 International Collegiate Quartet Champions, Prestige. Drew has a Bachelor's in Choral Music Education from Bowling Green State University and finished his Master's in Voice Performance at Roosevelt University in 2014. He lives in Orlando, FL where he works at Disney World as a member of the Voices of Liberty in Epcot. Drew enjoys reading out loud, listenin’ to Salsa music, and eating mangoes. 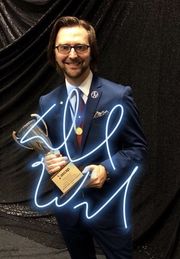 Dan Wessler (Bass), a native of Peoria, IL, holds a degree in music education from Bradley University and a master’s degree in choral conducting from Western Illinois University. He currently directs the Freeport High School choral program in Freeport, IL. Dan is also the director of The New Tradition, an award-winning barbershop chorus based in Northbrook, IL. He has frequently acted as a clinician/boys’ choir director at Youth In Harmony events, which aim to introduce young people to the joys of lifelong singing. Dan is a skilled barbershop arranger, writing contest and non-contest music for After Hours and various other quartets and choruses around the midwest. His other interests include symphonic music, the Beatles, and the Monty Python Comedy Troupe. Check out Dan's arrangements here! ​​www.dwarrangements.com 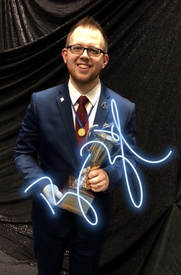 Bryan Ziegler (Baritone) has barbershop in his blood. His father brought him to his first Midwest Vocal Express Chorus rehearsal when Bryan was nine. He was instantly hooked, and eventually made his way to the international contest stage. He has earned four collegiate quartet medals (2010-13) and three chorus medals (2002-03, 2012), including gold in 2012 with the Ambassadors of Harmony. Bryan graduated from the University of Missouri-St. Louis in 2012 with a BA in Music, and graduated with an MA in Music Theory from the University of Minnesota in 2014. Bryan currently lives in Madison, WI, where he manages and operates a Caribou Coffee Shop. He enjoys cooking with his beautiful wife, Lauren, and playing with his three children.
After Hours Barbershop Quartet - 2018 International Barbershop Quartet Champions After Hours Quartet Bios